I have a few friends who are enthusiastic runners. Personally I don’t see the appeal, I understand the health benefits and even the potential to feel a sense of achievement after running a certain distance or doing so faster than a rival, but it really isn’t for me.
However, what I find most peculiar about running is that it usually completely absent from transport consultations such as the Greater Manchester LTP3. There was no mention of any athletics facilities at all in the LTP3, and United Kingdom Athletics did not submit a response at all. Whilst it could be argued that running is a sports or leisure pursuit, it is in many respects similar to walking, which is considered by this kind of consultation to be (an admittedly unimportant) form of transport. 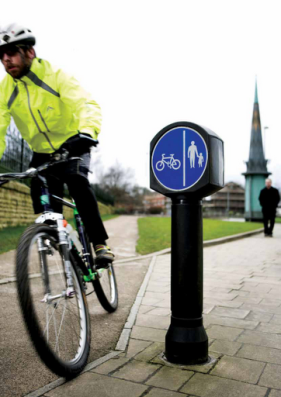 The title page from the LTP3  “Active travel” section, with a picture choice which aptly shows everything which is wrong with cycle promotion and provision in the UK.
Of course it doesn’t make sense to talk about running in the same terms as we talk about walking. Running is a popular leisure pursuit, but it is not the same as walking. Whilst some also walk for leisure or health, it is primarily considered to be a simple and effective way to get from A to B. When government talks of, “Providing for pedestrians,” they generally do not mean providing showers at work for those whose commute is a run, providing pleasant cross-country running routes or shiny new athletic facilities.
When government talks of, “Providing for cyclists,” however, they confuse cycle-sport and leisure cycling with cycling to get from A to B, an error akin to confusing runners with pedestrians. Whilst there will always be a minority of sporty cyclists who use their time travelling to work as a training ride, just as there are a few people at my place of work who use their time travelling to work as a training run, complete with performance clothing and a shower afterwards, this is not and never will be a mainstream activity. There’s nothing at all wrong with treating your ride to work as a training ride, but by confusing a minority pursuit such as this with utility cycling, which when provided for adequately, can be a mainstream mode of transport, successive governments (and some cycle campaigners) have failed to achieve any significant, meaningful gains in cycling rates. Promoting running and providing a circuitous cross-country route is not going to persuade the overwhelming majority of motorists to switch away from driving the 2 miles to work. Providing a decent walking environment and promoting walking (whilst hindering motoring) is. The same applies to cycling.
Cycle sport is probably very nearly as popular as it is going to get, and the popularity of this hobby is particularly impressive. Utility cycling by non-enthusiasts has been suppressed by years of car-centric and outright hostile street design to a level similar to that of sport-cycling, making it easy for governments and even cycling campaigns to consider cyclists as a single homogenous group. This confusion of sport cycling with the much greater potential for growth in utility cycling from A to B severely limits the potential for cycling’s growth. If we want to see any significant gains in cycling rates, we need to end this confusion of the more-nichey sport-cycling with the kind of everyday, utility cycling which can be made to appeal to the average person where the right kind of provision is made for them.

7 thoughts on “Running and walking”