Skip to primary content
I was recently asked to take a look at A Grim North senior’s 70s Raleigh racer. Upon hearing the description of something feeling a bit wrong at the back of the bike, I had assumed the problem would be loose bearing cones or damaged bearings.

When I got the bike I was rather surprised by its small size, it appears to be designed for a teenager or small adult, although it makes a reasonable upright bike for an average sized adult. I took a picture of it with the DL-1 for scale. What really strikes me (apart from the diminutive stature) is the practicality of the bike; unlike modern racing frames, the Raleigh Arena has relatively slack geometry, mudguards (albeit miniature ones to protect the frame rather than the rider, with eyelets for full mudguards) and even the traditional Raleigh lamp mount (although present on the right fork blade rather than the headset).

The Raleigh Arena has Olympic branding and sports a sticker stating that Raleigh’s team won the 1977 Tour de France. This suggests the bike is likely from 1980, the next Olympic year following the 1977 TDF win for Raleigh. 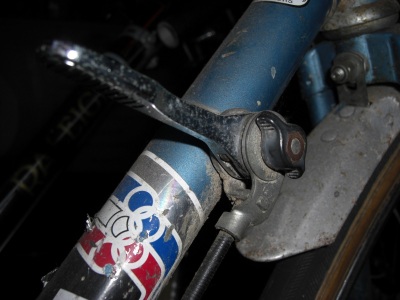 Raleigh-branded dérailleur. Could do with the having the transmission cleaned up and re-greased. 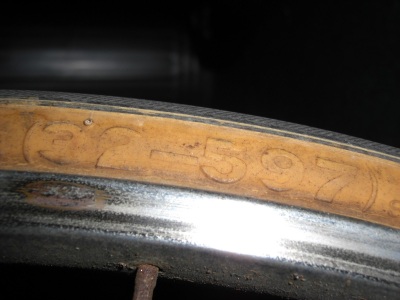 When I saw the bike I had assumed the wheels were 650A (590mm rim size) as seen on smaller roadsters such as the Pashley Princess. Upon closer inspection it turned out to be the even less common 597mm rim size which was traditionally used on Club bicycles and has since fallen into disuse.
The reported problem with the rear end of the bicycle appears to be due to a snapped spoke on the rear wheel, which has led to a slackening of the spoke tension on the rest of the wheel. I’m surprised that the wheel survived being ridden on when the bike was brought to me. With a replacement spoke and some tightening the wheel should be easily fixed, although the obsolete wheel size means that if this bike is to be put back in service, it will eventually need converting to a more common wheel size, such as 650A or 650B.