Skip to primary content
Back in February when I purchased the Brompton, I also invested in a luggage block and a Brompton C-bag. Whilst the price of the C-bag was enough to make me wince, it is a high-quality product and has served me well since then. However, circumstances change and I now find myself in need of more carrying capacity when using the Brompton, so I took the plunge and purchased a T-bag.

The T-bag was formerly known as the Touring Pannier and its recent name change brings it in-line with the rest of Brompton’s luggage range and also shows that they still don’t take themselves too seriously. It uses the same carrier frame as the C-bag but boasts a considerably increased capacity. The downside of this is that it is a bit more unwieldy and less pleasant to carry around when off the bike. The strap lacks the padded sleeve of the C-bag making it less suited to extended stretches of being carried over-the-shoulder.

The T-bag (completely unrolled) next to the C-bag. The difference in capacity is quite startling. The inside of the T-bag is lined with yellow fabric, as is the C-bag, in order to facilitate finding stuff rattling around the bottom. It’s the kind of small touch which can help rationalise purchasing luxury luggage such as this.

The zipped pocket contains a fluorescent yellow rain cover much like the one which comes with the C-bag (book not included).

Unlike the C-bag, the carry strap can be removed if preferred, which can be useful to prevent it flapping around when riding. The top of the bag has two strips of velcro to pair the edges of the bag together before the top is rolled down. As a nice extra touch, the bag includes two identical strips of velcro which can be used as ‘blanking strips’ if you do not wish to use the velcro fastening. 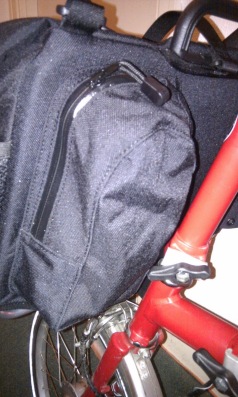 The rider-facing part of the bag contains two pockets, the left one is identical to the pockets on the C-bag, the right is a draw-string affair which permits over-stuffing and would be particularly useful as a bottle holder. After looking it over, I decided to put the bag’s capacity to the test: 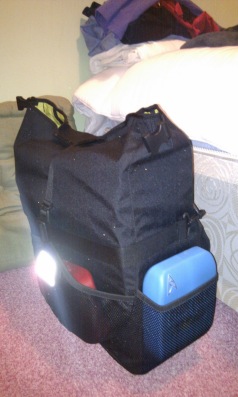 Much like the C-bag, the T-bag has a reflective rectangle on the front in order to prevent flash photography and possibly also to aid being seen.
This is the T-bag in its over-stuffed state (although I should add that there is still some room in the front mesh pocket). In this state the bag slightly interferes with the steering, but not enough to cause a problem when riding, only when manoeuvring the bike through doorways etc. In this state, the bag is sufficiently large to accommodate the entirety of Star Trek. 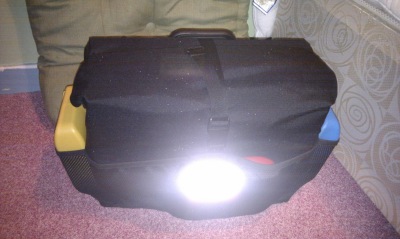 After removing the four Enterprise box sets, the bag can be properly rolled-closed and clipped into the sides where the yellow and blue boxes are.

The contents of the bag emptied out for scale: Three The Original Series box sets, the The Animated Series, seven The Next Generation box sets, seven Deep Space Nine box sets, seven Voyager box sets, four Enterprise box sets, the first 10 films box set, a separate copy of The Voyage Home and the most recent film on Blu-ray.
Whichever way you look at it, the Brompton T-bag has an impressive capacity. It would be ideal for carrying a significant amount of grocery shopping, lending further credibility to my assertion that if I could only have a single bike for all purposes, it would be a Brompton.
Advertisement