Firstly, apologies for the lack of new posts recently but I have been in the process of moving into my new house in Chester. Unfortunately, moving house generally means a period without broadband. Thankfully, normal services should resume soon.

My ride from Wrexham Industrial Estate to Wrexham General train station takes me along some idyllic country lanes, which I find quite pleasant. Thankfully, a strategic closure of part of Bryn Estyn Road to motor traffic stops these lanes being heavily used as rat runs. The route is still open to foot and cycle traffic, although the design of the entrances to this road are quite poor. Despite this, Bryn Estyn road is the one good piece of cycle infrastructure I’ve found in Wrexham so far. 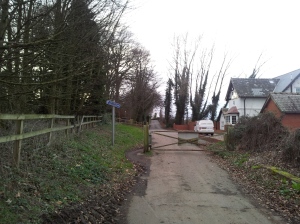 From here, cyclists can turn off into a relatively new residential development. Oddly enough, this development has a separate, possibly purpose-built cycle and walking network. Despite this, the paths closely resemble converted pavements. Naturally, this through route for cycles gives way to the minor residential access roads on the housing development, which is perfectly topped off with the obligatory “Cyclists Dismount” signs. I really hope that the developers didn’t receive any public money for this, unless this is actually a public art installation exploring the concept of the second class citizen.

Access to the cycle paths is rather impressively inaccessible, with many cyclists choosing to circumvent the excessive and inconsiderately designed barriers.

The route later rejoins the main road, where cyclists are encouraged to cross the road using a pedestrian crossing and cycle on the converted footway. Impressivley, this bi-directional cycle path does not even meet the DfT’s minimum width requirement for a single-direction cycle path. As always, this infrastructure also represents a raw deal for pedestrians.

The footway conversion continues along Holt Road towards Wrexham until just after the roundabout, where it abruptly ends, providing no way for cyclists to get back onto the correct side of the road. Many users (in their understandable confusion) probably end up cycling along the pavement, illegally. A few hundred metres further down the road, a cycle path suddenly reappears on Holt Road, on the opposite pavement, with no provision made for cyclists to get onto it from either the road or the opposite pavement where the cycle lane existed a few hundred metres down the road. 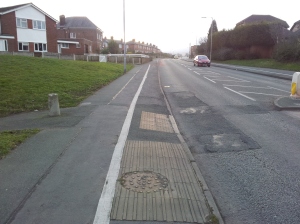 The surface quality is particularly impressive

Cyclists are moved from pavement to advisory road lanes, seemingly at random along Holt Road. 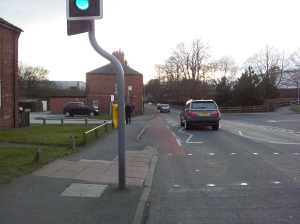 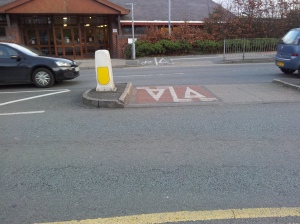 Where Holt Road meets the town centre, the cycle path takes cyclists away from the roundabout, where they are expected to give way at every arm of the roundabout, with the addition of some particularly unpleasant, steep kerbing along the path. 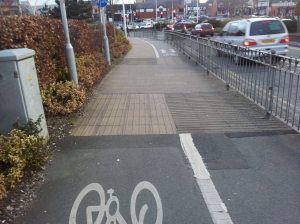 The narrow, bi-directional cycle lane swaps sides with the pedestrian section of the path here, for no apparent reason.

This route at least allows access to a cyclists-exempted one-way street, allowing cyclists to cut through the pedestrianised area. Somewhat useful, but making pedestrianised areas through-routes for cycles is problematic for cyclists and pedestrians alike, being especially irritating for blind and elderly people.

The last leg of the journey involves dealing with an unjustifiable one-way gyratory system near Wrexham General station. Separate contraflow cycle paths have been provided, although all of these are lazy pavement conversions, with poorly thought-out access points and dangerously sharp . It goes without saying that cyclists have no-priority over the joining roads.

Cycling through Wrexham reminds me a great deal of my visit to now-infamous Waltham Forest last year. I have been exploring other routes since I took these pictures and I continue to find ever more baffling examples of Wrexham’s cycle infrastructure. I will do a follow-up post when I become more familiar with cycling in Wrexham.

17 thoughts on “Crap Cycling in Wrexham”