It has been nearly a year and a half since I acquired my Brompton M3L. Occasionally I find myself wondering how much easier certain times in my life would have been if instead I had bought the bike years ago. I’d certainly have been able to avoid a lot of the expensive trial and error involved in my early bicycle-purchasing experiences. Because of this, I thought it might be a good idea to lay out the reasons why new cyclists might want to consider buying a Brompton.

As much as everyone always bangs on about it, the fold is exceptional. However, rather than focusing on the mechanism, consider the benefits it offers. A bicycle which is easily folded into a compact unit allows people such as flat-dwellers, who might otherwise struggle with storage of a bicycle, to work-around the limitations presented by their living situation. Additionally the fold allows the bicycle to be taken to places which they are not usually welcome; whilst I lived in Manchester my Brompton went with me into Umami, Sandbar, The Ducie Arms, the University of Manchester and The Cornerhouse to name just a few establishments.

You can give up

When you have just started cycling, or just returned to it after a long break, the new demands placed on your body by cycling take their toll until your body adapts. Thankfully this doesn’t take very long at all, but during this time, the Brompton at least gives you the opportunity to fold up and hop on the bus if you get tired or encounter a problem.

You can give up

Two out of every three people who take up cycling in the UK give it up. This is due to the atrocious conditions new cyclists face on the roads. If you decide that cycling on the roads as they currently are isn’t for you, the fact that Brompton bicycles tend to be easy to sell and retain their value well means that you’ll be able to recoup most of your investment quite easily. Even accessories such as Brompton bags fetch a decent price on eBay.

You will buy one eventually anyway

If you are the one in three new cyclists who does stick with cycling, you’ll probably end up buying a Brompton eventually anyway. Each meeting of the Cycling Embassy of Great Britain I go to I see more people who have acquired a Brompton. At the May AGM it was Sally Hinchcliffe and A Grim North. Eventually I’m sure Joe Dunckley will give in. Even Lovely Bicycle has fallen for the Brompton, despite some slightly lukewarm initial impressions in pre-ownership posts.

Whilst Brompton-branded accessories don’t really come cheap, they are generally very good. My own experience with both the C-bag and T-bag has been almost universally positive, as has also been the case with the dynamo wheel (other than the part where I was paying for them). A small amount of this outlay on accessories can be clawed back by taking the bike inside with you, which allows you to avoid buying a lock, which would be expensive if you subscribe to idea that it is good practice to spend ~10% of the value of a bike on a lock.

Jack of all trades

Whilst the Brompton isn’t the perfect bicycle for all situations, it is good enough for almost all of them. Despite this, I was surprised at how fast the Brompton can be ridden and how well it copes with this. The generous luggage capacity afforded by the T-bag and a saddlebag allows the Brompton to be a good enough load-carrying bicycle for the needs of most people. If I could only own a single bicycle, it would have to be a Brompton. 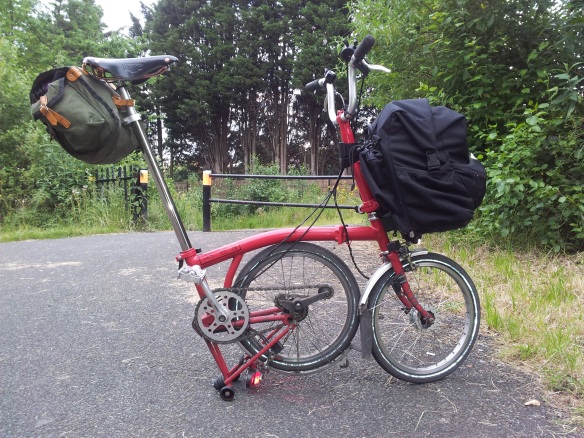 So new and would-be cyclists, consider the Brompton. Whilst it may appear expensive at first, at least you can flog it easily if it doesn’t work out, and if you do take to cycling you’ll probably end up buying one down the line anyway (and I can’t imagine they’ll be any cheaper in 2019).

27 thoughts on “Brompton for beginners?”