On Saturday I was fortunate enough to finally pick up the Brompton I ordered way back in May. When I spoke to staff at Harry Hall Cycles in Manchester, when looking for a P-type to test ride I was told that only around 0.5% of Bromptons sold by them were P-types, with the vast majority being the M-type. Even the S-type is more popular. Undeterred I ordered a P6R without having tried one (as conversion between types is possible). Now I’ve had a few outings on the bike, I thought I’d share some of my first impressions about the differences between the P6R and my old M3L.

Before riding the bike, I had read in several places that the P-type handlebar was very flexy, to the point where some riders felt unsafe. Thankfully, this turned out to be a massive exaggeration (or perhaps something which has been addressed since those comments were being made) as the P-type bar feels very sturdy, even more so than my c. 2009 M-type (but not quite as much as Ms C’s 2000 L5). The effective ‘cockpit’ is smaller than on the M, but this suits my riding quite well, as I often ended up riding on the ‘hoods’ of the M-type. The shorter brake levers seem to work just as well as the longer ones used on the M-type. I have not had much cause to use the lower position yet, and being equivalent height to the bar on the S-type I expect I will only use it when cycling into the wind out up a long hill. Thankfully the P-type seems to offer the advantages of the M and S-type bars in one, without the disadvantages of the S (no overstuffed T-bag, aggressive riding posture, looking a bit hipster). I imagine it won’t be long until I rip a few chunks out of the foam grips on the sides of the P-bar, but thankfully I could easily replace it with bar tape.

The main reason I opted for the rack is to increase the stability of the folded package, with the option for spillover capacity capacity for camping etc being desirable too. Obviously the height of the track makes it next to useless for panniers, but there is potential for attaching extra stuff to the top using the included bungees. I added the ‘Eazy Wheels’ a few hours after getting the bike, in order to make the folded bike easier to wheel along. If fitting these yourself it is important to resist to urge to fit the wheels symmetrically, as this will make the folded bike less stable. Just follow the instructions and you’ll be fine.

Yes I know, I already had dynamo lights on the M3L. The idea behind specifying dynamo lights was that it was an affordable way to get a dynamo wheel and light set for Ms C’s L5 Brompton (M5R in new money). The new dynamo wheel had the locknuts overtightened and the wheel did not spin as freely as the old one. It only required a quick adjustment but for someone new to dynamo hubs it might be perceived as normal drag. The included rear light is the same Spanninga-manufactured one I already had which includes the stand-light, but the front light was the bottom-of-the-range Lumotec halogen which does not have a stand-light. It is still an improvement on the battery-powered affair she was using before, but come winter it might be worth getting something better. 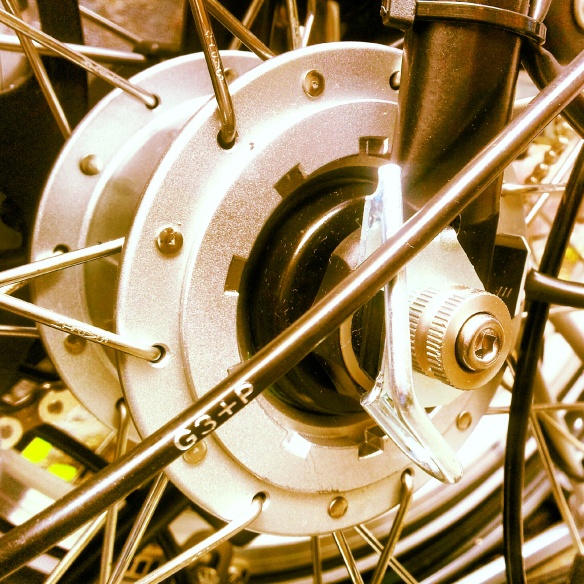 The factory cables routing uses tubing which is mostly run alongside an adjacent brake cable and it is generally more elegant than my ‘wrapping-around-brake-cables’ approach. A word of advice for anyone who is thinking of doing the same thing as me and hoping to do a quick front-light switch; the rear light connects to the front light via one blade & receptacle connection on the front lamps and one ring crimp at the mount, rather than two blade and receptacle crimps as with most higher-quality lamps. Re-using the factory wiring for the rear light with as new front lamp will require removing the ring crimp, stripping some wire and feeding it through the hole in the blade connector (ideally sealed up with some heat-shrink or at least electrical tape).

The M3L had a Sturmey Archer S-RF3 which, once the stock gearing was lowered was pretty good. The P6R comes with the Sturmey Archer BWR hub which is a three-speed hub with wider steps between gears than the S-RF3/AW. This hub also differs from the S-RF3 by having a differently-splined driver than other Sturmey three-speeds in order to accept an additional sprocket, which is coupled to Brompton’s 2-speed dérailleur. These are combined into a hybrid gearing system which uses the dérailleur to produce an additional step between each of the three gears, the result of which is six well-spaced gears. However this comes at a price, every other shift is a double hub & dérailleur shift. Whilst this sounds like a lot of hassle, in practice you will likely skip some of the gears out in normal operation, whilst appreciating having the option there should you need them.

The range of the current six speed set-up is pretty good, with the fist gear being slightly lower than first gear on the M3L after I lowered the gearing. However, I may still lower the front chain-ring to around 46t in the near future. I opted not to go for the lowered gearing option when buying the bike as it cost an additional £15 for a substitution, whereas an equivalent Stronglight set would only cost £20 and leave me with the original Brompton part as spares/eBay fodder. 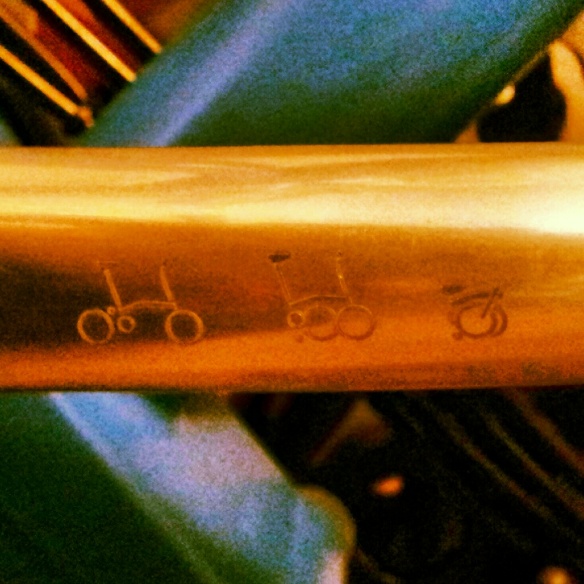 Both pedals have been redesigned since my M3L was made. The result is that they more closely match aesthetically and the folding pedal fixes to the crank arm via a socket head screw (looks like 10 mm) rather than a much rarer 24 mm hex head. Whilst the folding pedal bearing is still pressed into the aluminium plate (and thus not officially user serviceable) it appears to have been changed to one which I hope is more durable. The crank arms are now engraved with the icon depiction of the Brompton fold used in much of Brompton’s material, rather than the logo decal used in earlier years.

The brake pad cartridge holders have been changed to a new type with cut-outs in the side. I suspect that this was done to save weight, even though it is likely that it only saves as much weight as a good shave. 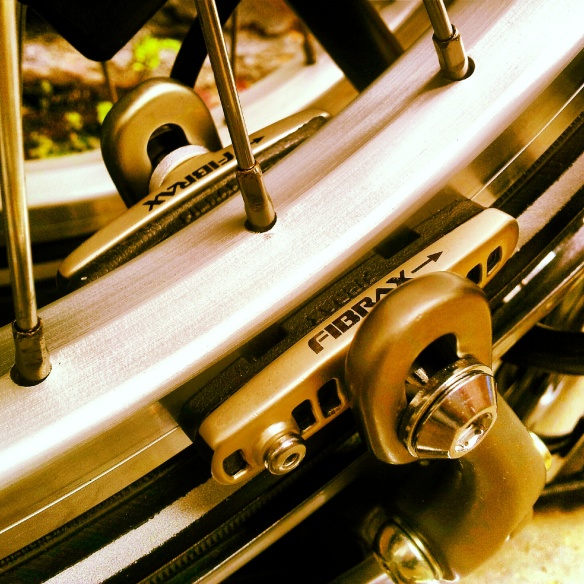 I have opted for the firm suspension block, as the standard one on the M3L spend most of its time in the ‘fully compressed’ state which negated much of its benefit. The firm block improves comfort by a surprising amount. I transferred the Brooks B17 saddle from the M3L to the P6R, although the stock saddle wasn’t all that bad.

So far the P6R is a pleasant improvement over the M3L. The bike feels re-assuringly solid, which is appreciated after some of the concessions Brompton had made to the overly weight-conscious over the years. The addition of the rack and the P-type handlebar adds a bit to the bike’s weight, but as is generally the case with weight on bicycles, this is effectively imperceptible when riding. It would make a difference when carrying the bike, but in practice this rarely comes up, as the bike can usually be pushed unfolded to within a few metres of where it will sit when folded up.