I posted the following photo on Twitter last week and it gained a fair amount of attention due to it showing something of a rarity in the UK: A cycle path with priority over a (minor) road (and its accompanying pavement) from Wrexham.

However, when put into context, this cycle paths is less impressive than it seems. Whilst it does have priority over a road (Cilcen Grove), the road in question has no real reason to exist; it links the roundabout to the right of the shot to a residential area to the left of it, but this function is also provided by the wider road visible in the left background of the shot (Hazel Grove), which this cycle path does not have priority over.

The cycle path itself is part of a wholly-inadequate facility which (presumably) aspires to help cyclists deal with the roundabout to the right of the shot. In addition to being circuitous and requiring cyclists to give way multiple times, this facility requires cyclists travelling east-west on Rhosnesi Lane to Price’s Lane to cross Rhosnesi Road to join this path, travel at least four times a far as on the road and then cross Price’s Lane to rejoin the road where this provision suddenly ends. Any cyclist unfamiliar with this provision heading in this direction may be tempted to join the off-road facility on the correct side of the road, but this facility does not permit its users to join Price’s Lane, instead forcing them onto Chester Road (southbound) for a few hundred metres until they can rejoin the road and do a U-turn to get back onto Price’s Lane. 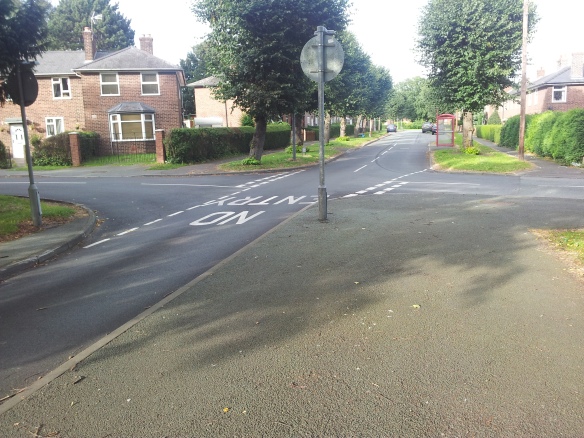 Looking down Cilcen Lane towards the residential area

Looking down Cilcen Lane to the roundabout

Because of the poor quality of this facility, I have not seen it used by any of the other cyclists I occasionally encounter in Wrexham. Sadly, this junction could have been designed successfully for all users; pedestrian, motorist or cyclist if it had been fortunate to be under the jurisdiction of the Dutch. As it currently exists, it is just a motorists’ roundabout which has had some money wasted around its periphery.