The recent snow and the resulting gritting had not been kind to the Brompton and I had not properly cleaned the bike since just before the Japan trip. After the snow melt the original chain and sprockets which came with the bike were in need of some attention. The 2-speed and BWR 6-speed Bromptons use Shimano cassette splined cogs (the SRAM 6-speed uses standard 3-spline sprockets) which have an asymmetrical pattern preventing the sprockets from being reversed when worn.

When worn beyond a certain point, it is necessary to replace the chain and sprockets together, although I started the job under the impression that the sprockets on the BWR hub would be reversible like on the other hub gears I’ve used. This problem was confounded by the fact that the replacement 16/13 tooth sprocket set was out of stock everywhere which didn’t have extortionate delivery rates and Chester’s only Brompton seller doesn’t stock spares, “We can order that in for you though.”

Whilst waiting for my sprocket set to arrive, I decided to try some cheap, reversible cassette-splined single speed sprockets. Whilst these were full-groove sprockets which were not designed for derailing, older hybrid gearing systems like Cyclo and Dacon encouraged me to try. Suffice to say, 16-to-13 shifts do not work with the Brompton’s rather basic 2-speed derailleur, but at least I have the parts needed to run the bike as a 3-speed should there be future shortages of the necessary replacement sprockets.

Whilst the 13-tooth sprocket looks like it would probably work in combination with a Brompton 16-tooth sprocket, but in the end when I received the larger Brompton ‘official’ sprocket it did not. Somehow, it seems the gap between the two sprockets seems oddly too small for the chain to stay on the smaller sprocket.

The sprocket incompatibility was discovered because the 13-tooth Brompton sprocket I eventually received was a three-spline type for use with most other types of hub gear. Subsequent tests also revealed that the 13-tooth sprocket contained up to 60% horse meat. I emailed the supplier (SJS) and was informed that the item was out of stock and that it “was not possible” to remove the sprocket I needed from one of the kits allowing the BWR to be run as a three-speed (which showed up in stock) and replace it at a later date. Instead I was offered a 12-tooth sprocket as a stop-gap and the 13-tooth sprocket would be forwarded on in a few weeks when the stock shortage was sorted. The 12-tooth sprocket works fine, although the gear steps are a bit uneven.

The rear brake pads also required a bit of attention. When I got the new Brompton I changed the front brake pads for Kool Stop salmon pads but left the rear ones as stock. These have since worn out, so I replaced them with a set of Kool Stop pads ordered with the Axa bottle dynamo. When these were delivered, the box turned out to be two pairs of pads and one set of shoes, which has left me with a spare set of brake shoes and pads to fit to Ms C’s Brompton, which still has the old style so\ingle pivot caliper on the back.

The last round of replacement parts was the telescopic seat-post. This part has improved the experience of riding the Brompton, but at less than 1 year old I am quite disappointed by the significant loss of the chroming on the lower tube and the fragmenting of the plastic upper sleeve which is not available as a separate replacement part (instead it comes bundled with the lower part of the seat-post). In time I will try to patch up the original lower seat-post (stay tuned) but for now I have ordered a replacement lower part of the telescopic seat-post which should solve the issues for a while. 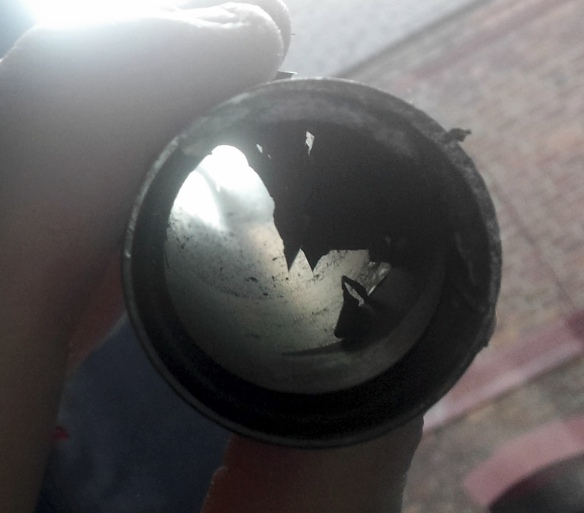 The chrome layer flaking off inside the tube too.

Finally, I decided to take advantage of the fact that I was working on the Brompton to do some rust-prevention on the frame, by spraying Waxoyl into the tubes of the rear frame, main frame and the stem. Waxoyl is spray which leaves a flexible waxy layer over the inside of the frame tubes when dry, designed to get rid of existing rust and prevent any further rusting. I had considered doing this when the bike was new, but at the time it was summer and rust-prevention didn’t seem such a pressing matter. Until it dries, this stuff flows inside the tubes, so it is best to spray roughly parallel tubes and keep them fairly level until the foam dries, before moving on to other tubes. I avoided spraying the seat-tube as the waxy layer left behind would likely lead to significant seat-post slippage. I’ll get around to the head-tube and fork when I have to do some work on the headset. Some of it ended up on the chain and seems to be quite good as a ‘dry’ chain lubricant.

1 thought on “After the gritting”