Upon returning to the UK after spending three weeks in the densely populated Chinese city of Kunming, I felt a yearning to get out into the countryside. For me, the easiest way to get out into the countryside to take to the stretch which exists between home and work. However, since moving house to the other side of Chester in early February 2016, I had not tried cycling between work and the new house, or really done any cycling which wasn’t strictly functional. Because of this, when I reviewed my Klean Kanteen Insulated bottle, I never really considered that the Kilner/Grolsch style swing-lock lid on it would be quite difficult to drink from whilst actually on the bike (When carrying it on the bike, I had usually not bothered drinking any of the contents until I got to the train). Because of this, on my ride through the country lanes I had to stop every time I wanted to take a sip.

The swing-lock cap can be removed fairly easily (although I am not sure how well it would hold up to being removed/replaced frequently) and replaced with either the standard loop carabiner top or the sport cap, so I decided to replace the swing-lock cap with the sport cap for drinking iced water whilst riding. I tend to get quite hot when cycling and the physiological and psychological benefits of having a really cold drink available when doing some fairly physical riding was something of a revelation for me. I haven’t really seen any of the other people on bikes, particularly the sport cyclists, using insulated bottles and this seems very odd to me now. I hope this is due to simple lack of awareness rather than misguided concerns over weight. There is no escaping the fact that water is heavy, so in the face of such a significant benefit why would you worry about a few extra grams from the bottle itself?

This left me with a bit of a problem. Before work I usually fill my insulated Klean Kanteen with Pepsi Max and drink it on the train or bus (I have recently been experimenting with travelling to and from work via bike-bus-bike rather than bike-train-bike due to the piss-poor punctuality, reliability and frequency of the Arriva Trains Wales service). In addition to requiring the the use of the swing-lock lid (which would have to be swapped for the sport cap each day) there is no way for me to refill my bottle with properly cold water after I leave the house. The solution was to buy another bottle so I could also take some iced water to work with me for later in the day (or if I choose to cycle home) so I purchased a 709 ml (24 US fl. oz.) Hydro Flask. 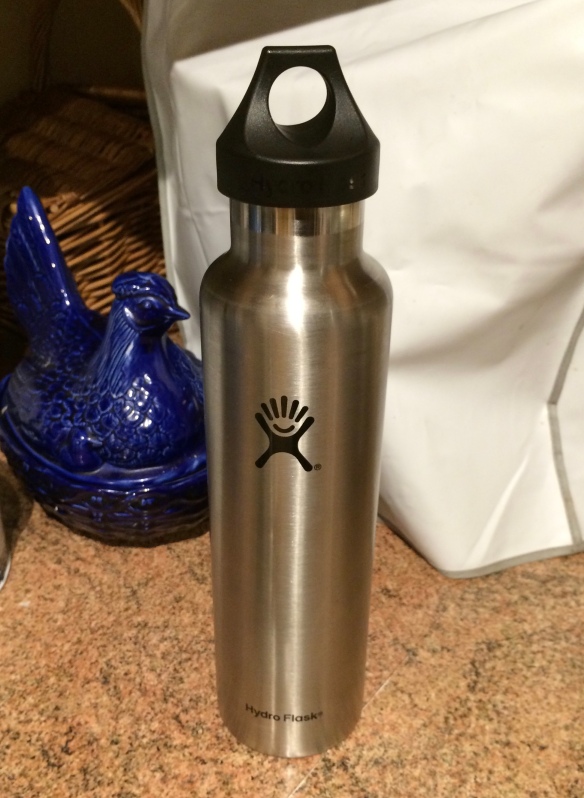 I chose Hydro Flask for the additional bottle because the insulating properties are generally regarded as pretty much identical to the Klean Kanteen but they differ in the available sizes and a few design details. The standard mouth Hydro Flasks are available in 18, 21 and 24 US fl. oz. sizes (532, 621 and 710 ml to the rest of the world) whereas the standard mouth insulated Klean Kanteens are available in 12, 20, 32 and 64 US fl. oz (355, 591, 946 and 1900 ml). Both manufacturers have some additional sizes only available with the wide mouth.

The designs of the bottles and caps also differ in a few ways. The thread on the loop carabiner and sport caps offered by both Klean Kanteen and Hydro Flask are compatible with standard mouth bottles from either company. The loop caps are similar, but the Hydro Flask one is solid and insulated, wheras the Klean kanteen one is hollow. 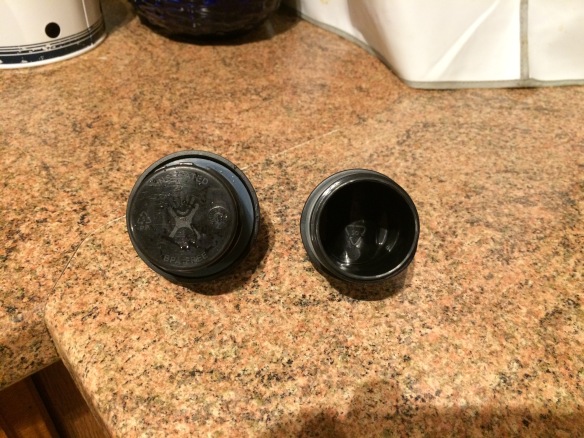 Solid, insulated HF on the left. Hollow KK on the right.

Artist’s impression of lid sealing. KK on the left, HF on the right. Both lids will seal on either bottle.

I have discovered that the gasket of the Hydro Flask loop cap, in addition the the vents cut in the threads seem to make this lid work better with carbonated beverages than the Klean Kanteen loop cap. This is true whether the cap is fitted to a Hydro Flask bottle or a Klean Kanteen bottle. 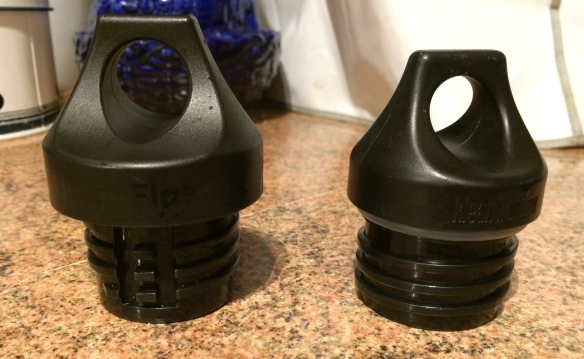 HF cap with thread cut-outs on left. KK cap without cut-out on right.

The sport caps are both similar, with both having a silicone spout which can be pulled open using fingers or teeth and both using a little silicone vent valve to let air into the bottle to replace the volume of liquid sucked out. A lot of users have reported that the vent valve on the Hydro Flask sport lid is prone to falling out with use, leading to leaks, which does not seem to a problem with the Klean Kanteen sport lid. Like the loop lid, the Hydro Flask sport lid is insulated, but is sealed with an O-ring similar to the Klean Kanteen rather than the gasket in the loop cap. I am not sure how much benefit the insulaton in the lids really provides, but the extra volume of the insulated lids should prevent the liquid inside from being able to slosh around as much.

I find that the green Klean Kanteen sport lids produce a mild plastic taste in water when it is not very cold which the black version does not seem to suffer from. However, YMMV.

As I had a spare Klean Kanteen sport cap, my solution has been to use the Hydro Flask loop cap when I put the bottle in my bag and then switching to the Klean Kanteen sport cap when I want to drink my water. This arrangement lets me drink iced water whilst riding and since overheating is usually the main limiting factor I encounter when cycling, having an insulated bottle filled with ice and water means I enjoy riding a whole lot more and can cover longer distances faster than I could before.