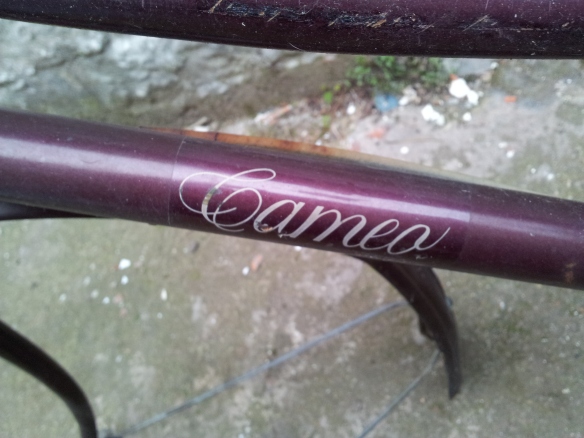 Walking home from the shop on Sunday I spotted a pair of bikes by the dumpsters at the end of a terrace. The one closest to me was a low end Halfords house-brand mountain bike. I wasn’t going to look any closer, but I spotted a Sturmey Archer AW hub on the bike behind and decided to take a closer look. The second bike was a Raleigh Cameo, one of the various names given to what is basically a ladies Raleigh Sports.

The rear hub is stamped 11.79, the front wheel is missing. I assume that the front wheel was stolen and the low value of the bike in its current state led the owners to simply give up on it. 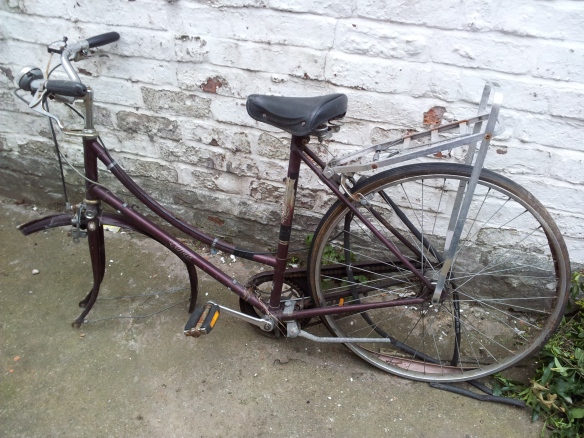 There are a few rusty spot on the frame, in keeping with the age and condition of the bike, but it is otherwise sound. The front mudguard looks as if it could be persuaded back into its original shape, but sadly the rear mudguard is missing (except for the remains of the right stay, which is caught in the wheel). The rear rack is not original, not to mention hideous. The saddle is a pretty basic mattress saddle of the era.

The fork has the same crown as my DL-1, the lug-work is also quite similar. The frame is quite similar to the step-through version of the DL-1, differing mainly in the seat and head-tube angles, which are slightly steeper on this model. With a bit of work, it could make quite a nice (third) bike for Ms. C and a loaner for visitors.

Finding this bike gave me an idea for a project. Seeing as the bike was free, I thought it would be interesting to try and restore it to a functional state using either free, cheap, hand-me-down or trade parts. These bikes (and very similar non-Raleigh models) were very common in their day, so it should be possible. Stay tuned for updates.

Last year, after I got my Twenty a friend of mine, AC also decided she would like to invest in a Twenty too. She named it Beatrix and now blogs about her experiences with the bike. The bike was re-painted at the time, but the result did not stand the test of time well, I believe due to the lack of a final clear coat. She asked me to do the re-spray.

Instead of all-over blue, AC asked me to paint the mudguards and chain-guard white, and re-paint the frame and fork in the same blue. When I applied the first coat of blue, the old paint bubbled off on the main tube to reveal the old Raleigh decal. I decided to take the initiative and leave this old decal exposed in a Time Team kind of way, a trench in the paintwork showing the history of the bike. To preserve the decal, I masked over it and cut around the decal.

To get the paint to adhere to the frame well, I gave the whole thing a sanding with fine grit sand paper and applied several thin coats of blue, with light sanding in-between coats. The white on the mudguards was not covering the blue appropriately, and I decided to get a can of cream paint to go over the white. After painting the frame, I used a combination of masking tape and bin bags to cover all but a small section of the main tube near the decal, which was then painted cream to frame the original decal.

The frame, fork, mudguards and chain-guard were all sanded lightly and coated with several layers of clear enamel spray, and the bike was re-assembled.

Beatrix as she was, on the back of the Yuba with my old Twenty

Beatrix after the re-spray

The Raleigh head-badge has been stripped and returned to prominence

The blue, white and clear spray used were from Halfords’ enamel range, the cream paint used was made by Plasti-kote.

Drum brakes are underrated.  I think they suffer at the hands of the relentless promotion of cycling a sport in the UK.  In the rest of Europe drum (also called hub brakes) and roller brakes (roller brakes being Shimano’s slightly different take on drum brakes) are widely used because they are effective in all weather conditions, due to being sealed away from the elements in the hub of the wheel and even with very little maintenance they last forever.  They may cost more than other brake systems can, but they are a long term investment and will save you money in the long run on disc brake pad and rotors or rim brake shoes (and fresh rims).  Racing bikes don’t come with them because they are heavier than rim brakes, and mountain bikes don’t come with them because they are less powerful than disc brakes.  Those two types of bikes pretty much cover bikes as far as bike shops are willing to promote and as far as most people here are concerned.  If you are riding a bike primarily for transport and utility, drum brakes are a good option to consider especially because they do not require any special mounting points on your bike like other brake types.  Simply build (or have built) a wheel with a drum brake hub, screw on the clip for the reaction arm (can be made to fit any for or frame) and away you go.  I decided to upgrade the front wheel of the Twenty with a drum brake hub I got from eBay quite cheap because the fork on the twenty only had a mounting point for calliper brakes, and the steel rims on the wheel meant that the brakes were awful.

I used a Sturmey Archer X-FD hub laced to a Sun Ringle rim (they make 451 mm rims, bought from here).  I used a 3-cross pattern due to the need to transmit torque from the hub to the rim, making a two cross pattern less suitable and a radial pattern a very bad idea.  The lack of dish and the fact that it is a 36 spoked 20 inch wheel means this wheel is probably stronger than the Yuba Mundo rear wheel.  I think it will last well.

The fork of the Twenty was initially too narrowly spaced for a standard 100 mm OLD hub, and the fork ends were keyhole shaped to aid wheel retention, preventing the use of a standard diameter axle.  The “crotch” of the dropout (to use the technical term) is able to accept a modern 9 mm axle, so all i had to do was file out the narrow keyhole shaped section to become straight and stretch out the the fork a bit by holding one fork blade with my foot whilst pulling in the other with my hands.

Sadly I didn’t take an after filing picture because my hands were too filthy, but if you have a normal bike, take the front wheel off and look at the fork ends, that is what it looked like afterwards.

I took the bike out for a test ride last night.  Drum brakes have a bedding in period like disc brakes, but even right away they were powerful enough to lock up the front wheel.  I suppose the smaller wheel size makes drum (or any hub-located brake) more effective; to use an oversimplification, if it takes half a revolution of the drum for the brake to stop the bike, on a smaller diameter wheel, this distance will be less, and you will stop more rapidly.

I may be the first person to put a drum brake on a Raleigh Twenty, I haven’t seen any pictures of anyone else doing it, (and SRAM actively discourage using their drum brake hubs in small wheels) but I hope that this information is useful for anyone thinking of upgrading their Twenty with new brakes.

I have spent the weekend working on the Twenty, stripping the paint, getting rid of rust, repainting, servicing the bearings and replacing the cables and chain.  It is now almost rideable, I just need to service the calliper brakes and re-attach them, although I doubt I will keep them.

Stripping the paint was very labour-intensive.  I used a combination of a wire brush drill bit, a sanding bit from a Dremel and manual sanding to remove the paint and the odd patch of rust.  Once the frame was naked I went to work giving everything a coat of anti-rust spray primer.

I suspended the frame by the headtube from a fire-escape to maximise the area I could spray  (I did the same for all the other bits such as the mudguard, fork etc)

After several layers of primer, paint and polyurethane clear-coat I re-assembled the bike.  The first thing I did was the fork and headset.  When I took the headset apart I was surprised to see that there were no bearings in the lower cup/crown race.  A quick look at Sheldon Brown’s Raleigh Twenty page fixed that, I needed 25 5/32nds of an inch ball bearings.  The cranks and bottom bracket seemed ok, so I kept them and just cleaned out the cups and replaced the bearings and re-assembled it all (after cleaning off the rust).  The back wheel seemed fine after a bit of poking around and a clean, with the Sturmey Archer AW hub living up to its reputation as one of the best made mechanical items in human history.  The front hub turned out well too, I replaced the 3/16th of an inch ball bearings and cleaned out the hub and all seems well with it.  By Sunday afternoon I had my new Raleigh Twenty almost ready to ride:

Those who have read this blog before may notice the similarity in the paintwork to the Yuba Mundo:

This is partly for comedic effect when they are used together, and partly because my current intended use for the Twenty will be when I go to pick people up from the city centre (or anywhere else within about 5 km or so) by taking the Twenty with me, with the Yuba acting like a mothership.

I recently picked up a 1979 Raleigh (Triumph) Twenty from eBay.  It was cheap and surprisingly I was able to ride it a few km from where I picked it up to Wigan Wallgate station.  This was appreciated because it meant I had to spend less time in Wigan.

The Raleigh Twenty was made between 1968 and 1984 and was sold under most of the company names Raleigh had accumulated by that point, with the brand used to differentiate between models:

The one I got is a Triumph, the second most basic of the models on this list.  Sadly the kitbag is gone, and the rest of it needs some work.  By the feel of the ride, all of the bearings need to be replaced.  This presents an interesting technical challenge, due to the widespread use of proprietary sizes and threading by Raleigh “back in the day.”

The Twenty on the train ride home

Genuine Brooks leather saddle (not as bad as I thought it would be, but it will be replaced).

At first I thought these were quick releases, but they are actually basically wing nuts.  They allow easy seat and handlebar height adjustment.

Interesting brazed yet non-lugged frame construction.  Seems to have stood the test of time though.

The bike only has mounts for caliper brakes, although the back also has a plate for mounting a Dutch-style O-lock, which I may do at some stage.

I am planning to start by completely disassembling the bike and treating any structural issues such as rust first, possibly giving it a new paint job.  All the ball bearings in the headset, bottom bracket and wheels will be replaced and the bottom bracket may be switched out if the cotters break when I remove them.  All the cables will benefit from being replaced too.

I will keep updates coming for this project as it progresses