The forthcoming Oxford Road bus corridor in Manchester is to be accompanied by a series of changes to the surrounding roads, including Upper Brook Street and Upper Lloyd Street. In their current form, the changes offer pitifully little for pedestrians and are potentially lethal for cyclists. In a consultation found here, the proposed changes to the layouts of these roads can be seen in detailed the detailed plans found here.

The specific details of what will be offered for cyclists on the relatively short section of Oxford Road from which general motor traffic is to be excluded will not be shared in any detail until 2013. This makes the current consultation relatively useless as we are prevented from seeing what may or may not be gained in exchange for the significant reduction in cyclists’ safety on the surrounding roads. Even in the unlikely event that both the short section of Oxford Road from which private motor vehicles are to be excluded from, and the remainder of this important route are to be brought up to something resembling Dutch standards, as unlikely as this would be, this does not excuse the significant increase in danger posed by the redesign of the surrounding roads, which cyclists would still have to use. 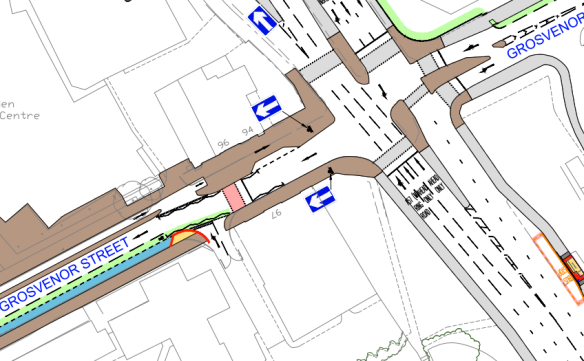 Here we see where Upper Brook Street meets Grosvenor Street. The protected contra-flow cycle lane on Grosvenor street, whilst not perfect was a welcome step in the right direction. Sadly the hideously botched Toucan crossing solution for cyclists where Grosvenor Street looks set to remain. A missed opportunity to make this unfinished bit of infrastructure, still one of the most notable in Manchester, into something genuinely fit for purpose.

Under the present layout, this is a far North as traffic can travel into the city, however the proposals will make Upper Brook Street two way as far as Portland Street for the first time in decades. Truly a step in the wrong direction. 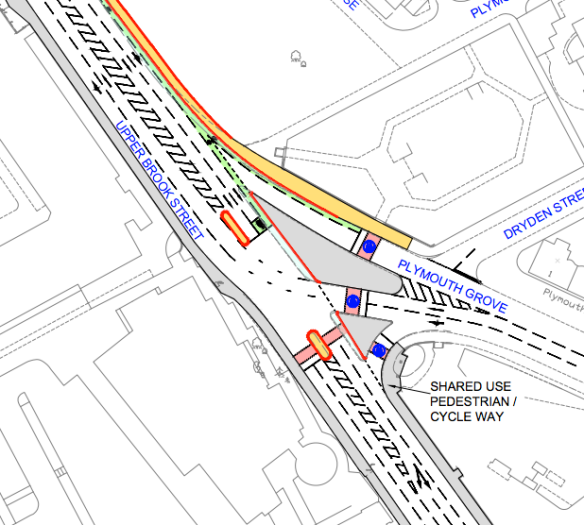 In a show of contempt for both cyclists and pedestrians, this overly-wide section of road is to have its southbound pavement converted into shared use between Plymouth grove and Grafton Street. From this point southwards, Upper Brook Street is to have one additional lane squeezed into the existing space. This extra lane it switches use to the opposite direction of traffic roughly every signalised junction. I used to live near here and I couldn’t count the number of dangerously close overtakes I endured using the current two-lane arrangement. This area also sees a great deal of pedestrian traffic due to the hospital and University, yet the proposed changes (or rather lack of improvements to existing dire facilities such as crossings) show a complete disregard for the needs and convenience of pedestrians.

As the extra motor vehicle lanes South of this point are not continuous in one direction, it will not create any extra vehicle capacity, instead encouraging motorists to dangerously speed through the sections where the road is two lanes before forming a jam immediately after the lights where two lanes are forced to merge back into one. This unnecessary extra merging will simply result in additional collisions between cars without providing any time benefit to motorists, whilst the additional lane will necessitate lane narrowing which will bring cars and cycles into conflict, making an increase in the number of injuries and fatalities an inevitability should the proposed designs be implemented. TfGM’s designs for this section of Upper Brook Street in particular will force cyclists and motor vehicles into even closer conflict. I have little doubt that, if implemented, these designs will lead to the deaths of cyclists.

Despite Upper Brook Street seeing significant amounts of pedestrian traffic, the proposal does nothing to facilitate this whatsoever, with existing anti-pedestrian junction geometries and multi-stage crossings requiring pedestrians to deviate repeatedly from desire lines remaining in place. Where additional crossing are to be provided, such as at Brunswick Street, pedestrians are treated with contempt; forced to cross via a ludicrous number of stages so as not to inconvenience motorists coming onto Upper Brook Street from popular residential rat-runs. Cyclists and pedestrians are to be brought into conflict between Plymouth Grove and Grafton Street by the lazy conversion of the inappropriate-width footway to ‘shared use’ in order to allow an unjustifiable three-lane stack at the junction between Upper Brook Street and Grafton Street. This junction, separating the Manchester Royal Infirmary, blood bank, flats and the University of Manchester Medical School sees a significant amount of foot traffic, making the atrocious treatment of pedestrians by the proposed design at this point inexcusable.

The proposed changes to Upper Brook Street in particular represent a potentially lethal attempt to squeeze ever more private cars into the same amount of space. In addition to the increase in fatalities and injuries, many cyclists will be intimidated off these roads entirely, either continuing to cycle but on the pavement, causing problems for pedestrians, or switching to another, less desirable mode of transport. Where cycle infrastructure is proposed, such as Booth Street West and Higher Cambridge Street, it is of the same kind which has been shown time and time again to fail to meet the needs of cyclists for both safety and convenience; advisory cycle lanes and ASLs. Advisory cycle lanes are generally less than useless, they are frequently blocked by legally parked cars and routinely abandon their users at junctions, anywhere where the road design becomes confusing or complex or where the road starts to narrow and cyclists might genuinely need some additional protection from the motor vehicles which have been brought into close proximity with them. In the few places where cycle infrastructure is proposed in the current designs they are simply paint on the carriageway or lazy footway ‘conversions’. At junctions, turning geometries are not tightened up at all (as is commonplace in The Netherlands and Denmark) meaning left turning vehicles can perform turns at higher speeds, increasing the chances of a ‘left-hook’ collision with a cyclist, which are often fatal for the cyclist.

In addition to the problems caused for pedestrians by ill-conceived shard use paths as between Plymouth Grove and Grafton Street and the risk of overall increased pavement cycling, the few additional measures included supposedly to benefit pedestrians have been done in a manner which shows utter contempt for the value of pedestrians’ time and the quality of their experience of walking. The increase number of vehicle lanes will increase noise and pollution endured by pedestrians, cyclists and residents, which make the already formidable barrier presented by the road even more difficult for pedestrians to overcome.

These designs need to be changed as a matter of urgency. In their current form they represent a disaster waiting to happen. 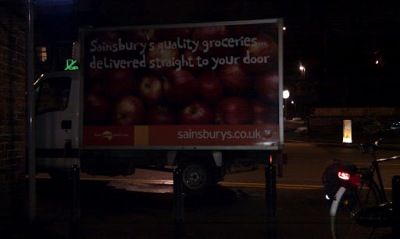 Those familiar with the area may find it puzzling that someone living here in Owen’s Park halls of residence would want to get groceries delivered by Sainsbury’s. I feel that the level of contempt displayed by the driver for pedestrians, cyclists, pram users and wheelchair users reflects badly on J Sainsbury’s as a whole. I have emailed Sainsbury’s about this incident and I will post an update if and when they reply.