Skip to primary content
I currently have three bicycles:
Raleigh DL-1:
The original DL-1 was designed as part of a British Army contract and functioned as the official British Army bicycle. Produced by Raleigh in Nottingham from 1913 until 1985, it had only fairly minimal changes made to its design throughout its production run. The DL-1 served as the standard British Police bicycle for many years. They are still manufactered under license by Raleigh Denmark, which is where the frame from mine originates. This has the advantage of being a DL-1 without having the non-standard Raleigh threading on the fork and bottom bracket shell. I use this bike as my everyday transportation. 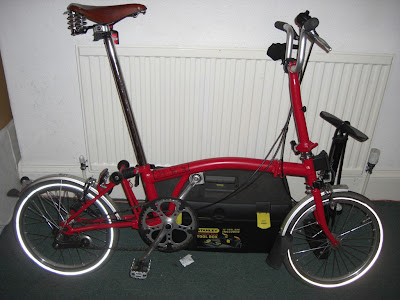 The history of the Brompton and its development has already been written more eloquently than I could have. The Brompton has a large following of dedicated fans, for the sole reason that it is arguably the best folding bike on the market, and has been for many years. The M3L is a 3-speed (mine has the Sturmey Archer hub) with mudguards but no rack. I was also fortunate enough to acquire a Brooks B67 with mine. I use it to do the things none of my other bikes could, such as travelling on a Virgin Train, bus or taking into a pub. The Brompton is already eclipsing many of the uses for which I own the Raleigh Twenty…

Eventually I grew so fond of the Brompton that I replaced it, with another Brompton. This time I added three more gears, the rear rack and the P-type ‘touring’ handlebar; a P6R in Cycling Embassy arctic blue and black livery. The P6R has since become the bike I use most.

The Yuba Mundo is a cargo bike manufactured by Yuba Bicycles. It is designed to carry loads of up to 200 kg and its specification was chosen for the maximum worldwide availability of common replacement parts. This means dérailleur gears, freewheel and 26 inch wheels. The bike is solid and reliable, if not overly pretty. My Yuba Mundo is a V2 and it is used for a variety of tasks; mainly shopping, carrying items too large for the DL-1 and riding in snowy or icy conditions.

I have also sold or retired several bikes:
Revolution Cuillin Sport ’08:
I owned this bike from Summer 2008 until Spring 2010. It was my first “serious” (as in, not a piece of crap) bike. I bought this because I fell for the sporty image of cycling promoted by the bike shops, as well as my lack of awareness of any bikes other than these or road bikes. We had many good times together, but after buying the Yuba Mundo, I realised how uncomfortable and impractical this bike was for 99% of the riding I did; urban, transportation riding. Luckily I found a more sporty owner for it and it now lives on riding trails and dirt paths rather than spending all of its time on the road with slicks. I replaced it with the Kona Africa Bike.

Kona Africa Bike:
I purchased this bike after the Yuba Mundo showed me what riding a bike could feel like. This particular model appealed to me because of the accessories it came with and the fact that for every 2 of them sold in the Western World, Kona donated one to aid workers in some of the most deprived parts of Africa and Asia. I was very happy with this bike, the only downside was that the seat-tube angle was too steep; the bike had the rather unfortunate “comfort” geometry. This wasn’t a problem on shorter rides, but after about 25-30 km I started to feel the limitations of the bike. When I saw the Raleigh DL-1 at an unmissable price, I decided to replace this bike with that. It has since been given away to help someone else discover the joys of upright cycling. For shorter, urban riding it is ideal. 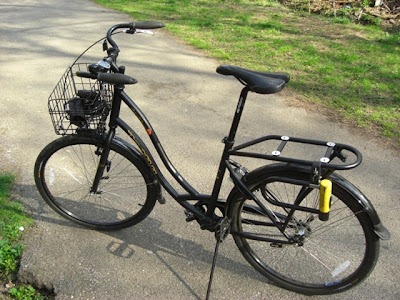 Raleigh Twenty:
The Raleigh Twenty was produced from 1968 until 1984. In 1977 it was Raleigh’s most popular model and possibly the best selling bicycle in the UK. The advantage of this is that there are a lot of them still around, they are solid, well built and dirt-cheap. My Raleigh Twenty was mainly used as a loaner bike for guests, although I did ride it when I needed to leave a bike locked up outside for a long time, in a high crime area, or need to take a bike on a busy train. A pair of Twentys can be carried on the Yuba Mundo.
Sadly, after buying the Brompton, I no longer had much use for the Twenty, nor the space to store it.

3 thoughts on “The Bikes”