Skip to primary content
I have worked on a number of bikes with Sturmey Archer AW hubs, some over 30 years old, but this is the first time I have had to disassemble one. That fact alone is a testament to the quality of the design of the AW three-speed hub.
The hub in question is from a bike belonging to a good friend of mine, who received it as an Xmas present in 2010 and is now in the process of learning to ride. A lot of the work I did on the bike before Xmas was getting the gears to shift, due to a problem with the shifter it came with, meaning I missed the problem with the low-gear pawls as the bike was stuck in high gear until near the time it was ready for delivery.

Cutaway diagram of the AW hub, taken from Sheldon Brown’s excellent AW article. The low gear pawls have been highlighted in red, these engage with the hub shell in 1st gear, and are disengaged in second and third gear, leading to the characteristic Sturmey Archer “tick” when in higher gears. The high gear pawls are highlighted in green.
To disassemble an AW, you first need to remove the nuts and bearing cone on the left side of the hub. Once you have done this, the innards can be removed by unscrewing the right-hand ball ring, which is the bit behind the sprocket which screws into the hub shell. To do this you will need a hammer, a screwdriver and brute force.

Everything from the left-hand side of the axle (the washer should be between the two nuts for them to be in their proper order). The 1st gear pawls and pins can be seen to the left, as well as the remains of the pawl springs

The AW internals with the 1st gear pawls removed
Upon disassembly of the hub, the problem became clear, one of the pawl springs for the low gear pawl had come loose and been ground into dust. The other one was in bad shape too. Luckily I was able to order some replacements cheaply online. Whilst I waited for delivery, I decided to completely dismantle the hub and clean the rusty grease away, re-assemble and re-lubricate it and replace the missing/broken pawls.

The locknut, washer, cone from the right hand side of the axle, next to the spring and washer which push the mechanism into 3rd gear by default when the gear cable is allowed to go slack

Here is how it all fits together, the AW, shown as an exploded diagram, courtesy of hadland.me.uk (click image to enlarge)
The innards of the AW hub are not overly complex making servicing one a lot less daunting than you’d expect. Completely disassembling the hub allowed me to overhaul the bearings, of which there are three sets in the AW hub.

The three sets of bearings in the AW hub, highlighted here in red.

The parts of the AW hub after cleaning

Here it is after being re-assembled, oiled (thanks to Jim for the oil tip) and screwed back into the shell. 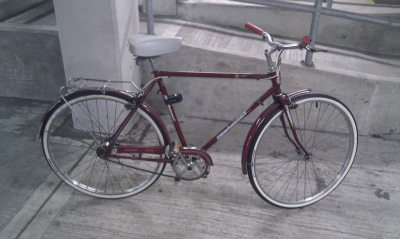 And here is the bike re-assembled with new Delta Cruisers front and rear. I think he should get a Brooks B66/67 next
It is difficult to take many/good pictures whilst doing this kind of job, because the filth and grease inside a 30 year old hub can make it undesirable to handle a camera. Despite this, I hope that this post helps others out there whose AW could use a bit of a tune-up, but have been put off by the fear that the innards would be too complex to deal with.

4 thoughts on “Repairing an AW hub”