Skip to primary content
Despite no-longer being mine, the Kona Africa Bike continues to be treated to upgrades and improvements, the latest of which is a Basil Memories front rack. The Africa Bike originally came with a spring-loaded folding front basket which, whilst an excellent idea in theory, ended up squeaking excessively in use. This may have been partly due to the fact that I one carried a 10 kg bag of cat litter in there, which it became immediately obvious was far too heavy for the basket. The new rack which takes its place has a weight rating of 15 kg, adding a reasonable amount of extra carrying capacity to the bike. I personally find having luggage up-front to be re-assuring because I can keep an eye on it whilst on the move. Access to luggage whilst on the move is another bonus. 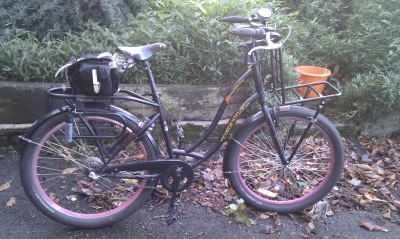 The rack is not the only addition to the Africa Bike, a Brooks saddle was added a few months back, and a Carradice Pendle saddle bag is another recent addition. 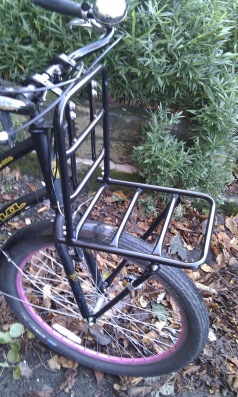 The Basil Memories front rack attached to the handlebar via hooks, in much the same way as the folding basket which came with the bike. The legs are intended to fit onto the front wheel axle, which would not be a problem on a bike with thin fork tubing or a lot of rake, such as a typical roadster.

Thankfully, despite the thick fork tubing of the Africa Bike, the rack legs were easily attached to the fork via the second set of eyelets above the axle, designed for attaching a large basket or rack.

The hooks which attach the rack to the handlebar are adjustable to accommodate a wide variety of bike sizes and handlebar heights, with at least 20 cm of extra height left over for the set-up on the Africa Bike. The only thing missing now is a wicker hamper to sit on the rack